The world of Reggae music has been thrown into mourning this night following the Death of legendary reggae musician Bunny Wailer. His Death was confirmed by the minister of. culture in Jamaica. 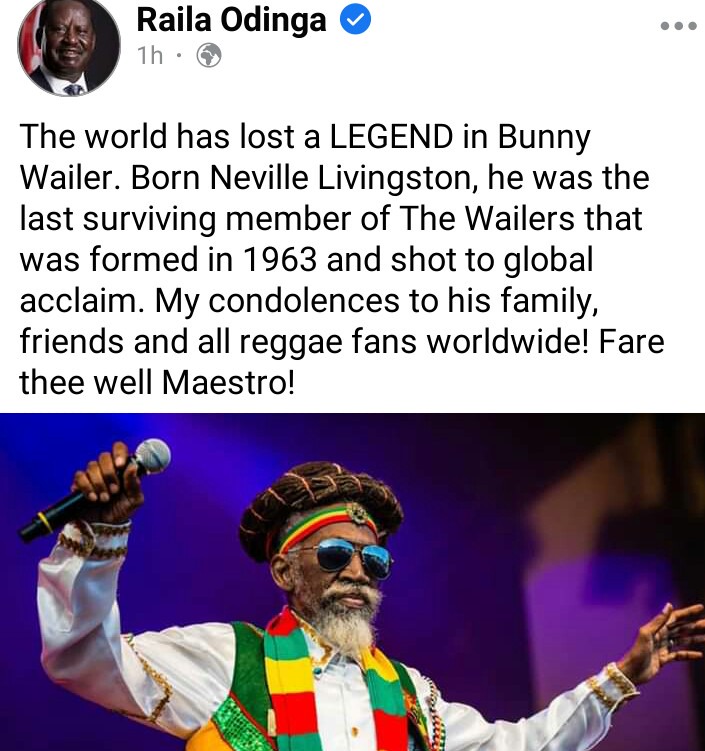 Raila Odinga through his Facebook page has lead other leader in mourning of the legendary musician. He wrote that, “The world has lost a legendary in Bunny Wailer.

Born in Neville Livingstone he was the last surviving member of the Wailer that was formed in 1963 and shot to global acclaim. My condolence to his family, friend and all reggae fans world wide. Fare Thee Well Maestro.” 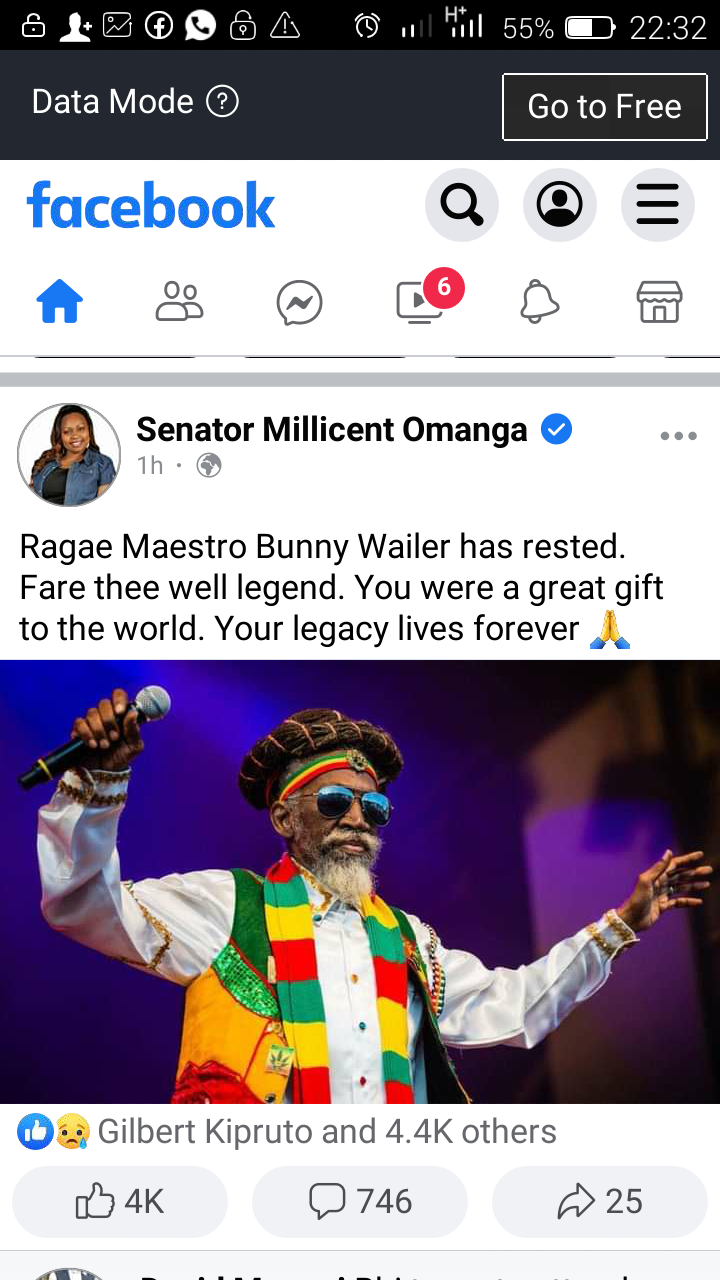 Also nominated senator Millicent Omanga post her condolence through his Facebook page stating that Raggae Maestro Bunny wailer has. rested. Fare Thee Well legend. You were a great gift to the world. Your legacy lives forever.

The 73-years-old died early today in Kingston hospital where he had been admitted for a while. He was among the founding members of. famous reggae group Wailer alongside Bob Marley and peter Tosh

May his Soul Rest In Eternal Place.

Meanwhile what is your best song of bunny wailer

READ ALSO:   This is What Will Happen When Raila Becomes The President; Erick Omondi Leaks Information

Due the Covid-19 many people have been compelled to work from home as some people have lost their sources of livelihood. Day by day the social media sites have been getting new sign ups. This made me conclude that there are two kinds of people: Those who spend money to be online as others make money online. The beauty of online writing is the fact that you can work at your own convenience and you dont have to commute to and from your workplace. What makes having money enjoyable is the freedom and time comes with it. It is sad to note that most companies have taken advantage of the desperate online users. At the moment there are very many pyramid schemers who are out to prey from the innocent users. However I would like to caution you that online writing is not an easy walk in the park. A person has to be committed and dedicated to the work that you are doing. Below are some of the companies that offer online writing jobs. Pro Bloggers This is a company that hire serious writers who are willing to make a living through writing. The company has helped many upcoming writers to make fortunate out of their passion for writing. It is recommended that you go through Darren Rowse writings on how you should approach a Publisher or online business before starting off as a writter at Pro Bloggers.
READ ALSO:   Majirani Officially Quits Music
Freelance Writing Gigs The freelance writing gigs provides an opportunity to connect to potential clients who are looking for employees. The website provides job opportunities from craglist and other leading article writing sites. Media Bistro Media Bistro is a websites that offers writters an opportunity that ranges from the industries like TV, PR/marketing, magazine and book publishing and social media, which are appropiriate for everyone interested in online jobs. Tips on how to succeed in online writing  1. Have a passion for writing The mistake that most amateurs commit is to put money ahead of the writing. You need to start by building your passion in writing. 2. Be ready to learn Before you start writing, go through the guidelines and instructions provided by your employer.Be willing to learn new skills from your day to day activities. 3. Remain committed and consistent in your writing At times you may reach a point where you feel like the world has come to an end. But you must not give up but continue putting your very best to what you are doing. 4. Borrow from other people’s experience Don’t despise people who have gone ahead of you. Go through people’s articles that have been outstanding.
Tweet