The deputy president William Ruto has continued to win the hearts of many people due to his actions of good will to the poor Kenyans.

Since the 2013 elections Ruto has repeatedly referred himself as a hustler which has made him become popular amongst ‘Wanjiku’.

Yesterday Dr William Ruto hanged out with the key players in Matatu sector and was seen standing outside the vehicle as a tour. “He bought a folding picnic table from a roadside carpenter. He’s bought a matatu for a sacco. What’s next? An orphanage? Open the churches back up again so he can buy them together with the priests. Blind thirst and greed for power is an aphrodisiac. Civil society beware!” Makau Mutua remarked.

This action by the deputy president caught the attention of ODM allied lawyer Makau Mutua. He revealed that soon Ruto will proceed to orphanages, then open churches in order to buy the priests. 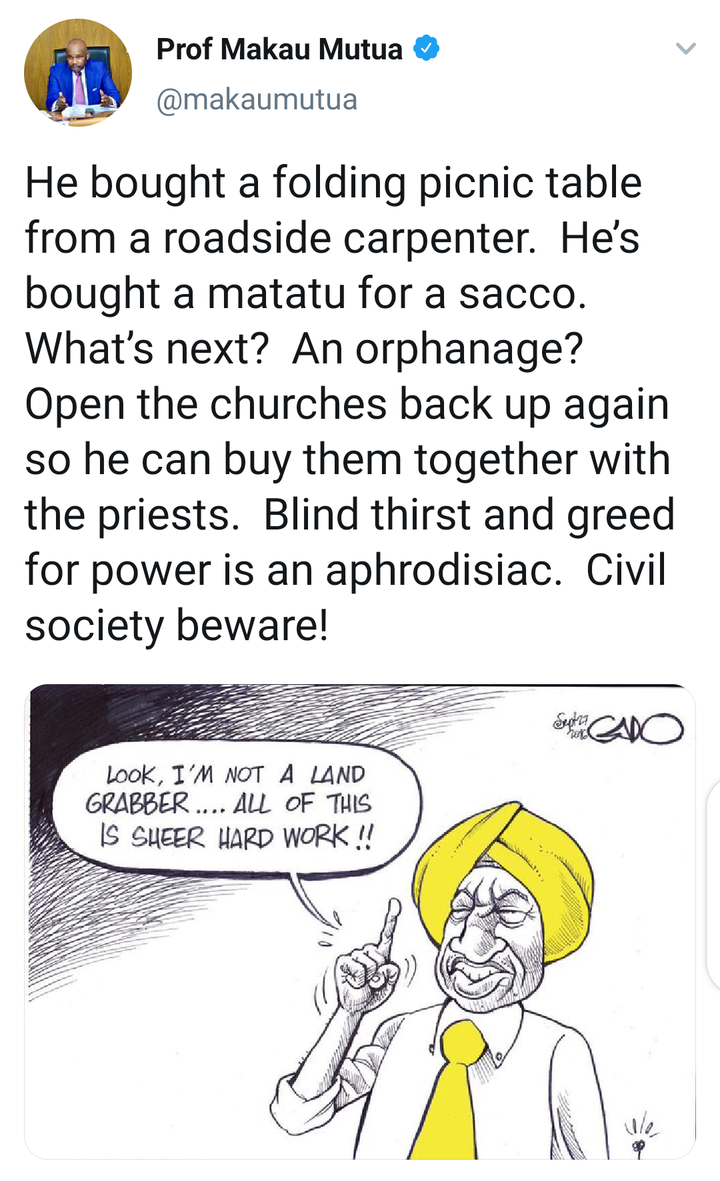 “Hahaha…..clearly the civil society is torn right in the middle over this. Who is the greater evil? Support a thieving Ruto with PEV blood all over him or support a BBI candidate that will ensure the roots of crony capitalism become permanently entrenched in the constitution,” Architect asserted.

READ ALSO:   Raila Bows Down To Ruto On BBI

Kamau remarked, “Whether @WilliamsRuto wins Presidency or not, u &I agree bus bought for the SACCOs,Sewer,car wash, hair dryers, laundry machines, motorbikes, printers, will in a big way impact on the recipients. That’s exactly what comes of a leader. Not just English like you and your Clubs’.”

Due the Covid-19 many people have been compelled to work from home as some people have lost their sources of livelihood. Day by day the social media sites have been getting new sign ups. This made me conclude that there are two kinds of people: Those who spend money to be online as others make money online. The beauty of online writing is the fact that you can work at your own convenience and you dont have to commute to and from your workplace. What makes having money enjoyable is the freedom and time comes with it. It is sad to note that most companies have taken advantage of the desperate online users. At the moment there are very many pyramid schemers who are out to prey from the innocent users. However I would like to caution you that online writing is not an easy walk in the park. A person has to be committed and dedicated to the work that you are doing. Below are some of the companies that offer online writing jobs. Pro Bloggers This is a company that hire serious writers who are willing to make a living through writing. The company has helped many upcoming writers to make fortunate out of their passion for writing. It is recommended that you go through Darren Rowse writings on how you should approach a Publisher or online business before starting off as a writter at Pro Bloggers.
READ ALSO:   Miguna Turns Down Uhuru's Company 'Offer'
Freelance Writing Gigs The freelance writing gigs provides an opportunity to connect to potential clients who are looking for employees. The website provides job opportunities from craglist and other leading article writing sites. Media Bistro Media Bistro is a websites that offers writters an opportunity that ranges from the industries like TV, PR/marketing, magazine and book publishing and social media, which are appropiriate for everyone interested in online jobs. Tips on how to succeed in online writing  1. Have a passion for writing The mistake that most amateurs commit is to put money ahead of the writing. You need to start by building your passion in writing. 2. Be ready to learn Before you start writing, go through the guidelines and instructions provided by your employer.Be willing to learn new skills from your day to day activities. 3. Remain committed and consistent in your writing At times you may reach a point where you feel like the world has come to an end. But you must not give up but continue putting your very best to what you are doing. 4. Borrow from other people’s experience Don’t despise people who have gone ahead of you. Go through people’s articles that have been outstanding.
Tweet