Mombasa governor Ali Hassan Joho came to the limelight when he strongly opposed president Uhuru Kenyatta after the 2017 presidential election.

Governor Joho displayed his love for fashion when wore an outfit that costs close to Ksh 150K a few days ago when he went to officially commission the Tudor-Moroto water supply that is expected to help 15000 residents.

A research that was done by stateupdate.co.ke on Versace an international fashion house we discovered that is priced at $ 1,550.

Hassan Joho has continued to surprise many people due to his lavish lifestyle and massive wealth.

When Hassan Joho alongside Junet Mohammed jetted to visit the former prime minister Raila Odinga at Dubai, he attracted public attention as people were amazed by the wealth that he has acquired. 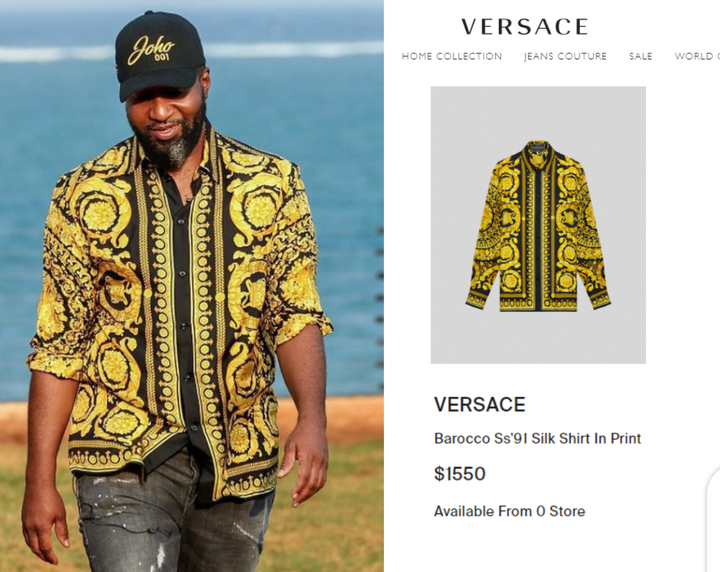 The handshake between the president and the former prime Minister Raila Odinga United both leaders and ended the controversy that existed between the two Political kingpins.

The ODM governor Ali Hassan Joho will be remembered for his stand for defending coastal residents against various Political injustices and harsh economic realities that have been witnessed since time in memorial.

Due the Covid-19 many people have been compelled to work from home as some people have lost their sources of livelihood. Day by day the social media sites have been getting new sign ups. This made me conclude that there are two kinds of people: Those who spend money to be online as others make money online. The beauty of online writing is the fact that you can work at your own convenience and you dont have to commute to and from your workplace. What makes having money enjoyable is the freedom and time comes with it. It is sad to note that most companies have taken advantage of the desperate online users. At the moment there are very many pyramid schemers who are out to prey from the innocent users. However I would like to caution you that online writing is not an easy walk in the park. A person has to be committed and dedicated to the work that you are doing. Below are some of the companies that offer online writing jobs. Pro Bloggers This is a company that hire serious writers who are willing to make a living through writing. The company has helped many upcoming writers to make fortunate out of their passion for writing. It is recommended that you go through Darren Rowse writings on how you should approach a Publisher or online business before starting off as a writter at Pro Bloggers.
READ ALSO:   Counties That Has Made President Uhuru Not To Reopen The Economy Amidst Covid-19
Freelance Writing Gigs The freelance writing gigs provides an opportunity to connect to potential clients who are looking for employees. The website provides job opportunities from craglist and other leading article writing sites. Media Bistro Media Bistro is a websites that offers writters an opportunity that ranges from the industries like TV, PR/marketing, magazine and book publishing and social media, which are appropiriate for everyone interested in online jobs. Tips on how to succeed in online writing  1. Have a passion for writing The mistake that most amateurs commit is to put money ahead of the writing. You need to start by building your passion in writing. 2. Be ready to learn Before you start writing, go through the guidelines and instructions provided by your employer.Be willing to learn new skills from your day to day activities. 3. Remain committed and consistent in your writing At times you may reach a point where you feel like the world has come to an end. But you must not give up but continue putting your very best to what you are doing. 4. Borrow from other people’s experience Don’t despise people who have gone ahead of you. Go through people’s articles that have been outstanding.
Tweet