Purity Mwambia’s expose on the use of police guns, uniforms and other equipments to commit crime has continued to stir mixed reactions from Kenyans.

Today, Citizen TV handed back guns recovered in the year long investigation to police. Rights activist groups called for a speedy investigations into criminality in the police service.

The National police service distanced itself from reports circulating on social media that the police spokesperson made comments on the #silahamtaani.

“It has come to our attention that there are posts circulating on social media allegedly made by Mr. Charles Owino, The National Police Service Spokesperson. Mr. Owino is currently on annual leave and has not made any comments about the #silahamtaani expose which aired recently,” National police service posted twitter.

KFCB head Ezekiel Mutua rubbished Citizen TV’s expose saying that it wrong to generalize that the police are bad as there are some performing their roles effectively.

“Is the media running a smear campaign against the police? Citizen TV yesterday and KTN News just run “The Lead” on the same subject. We have rogue police officers, but we also have good officers who put their lives on the line every day to protect ours. It’s wrong to generalise!” Ezekiel Mutua said.

READ ALSO:   A 19 Year Old Girl Gang Raped And Thrown Off A Building In Somalia 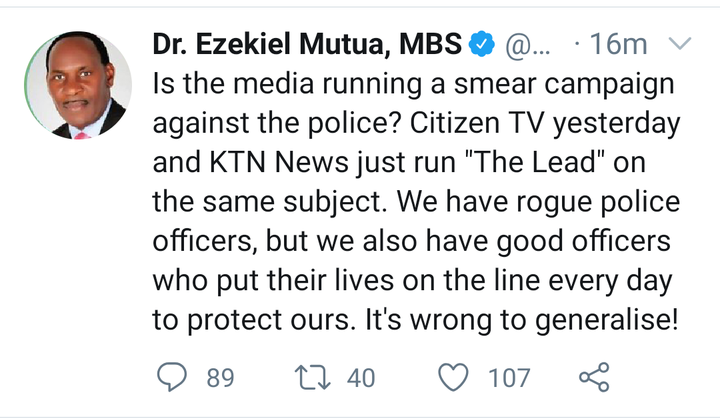